We recently began the story around what goes into the furniture design for the Framery Q, our mid-sized acoustic pod. We continue with that story here and introduce one of the first iterations that our designers brought to life called Working with PAL.

Three of our product designers, Mikko Tamminen, Pekka Toivola and Janne Haveri, share their memories of what went into the design of Working with PAL, which was created specifically for shorter meetings within the Framery Q.

An acoustic space for quick meetings and calls

Working with PAL was one of the first furniture concepts designed to meet the needs of quick meetings, private sessions and video conferences in offices.

“We were looking to create a place where workers could take all their ad-hoc, private and confidential conversations that would typically be held at their own desks,” Mikko explains.

“When these pods are in the middle of office spaces and near co-workers’ desks and work stations, a user can easily move the distracting conversations inside these spaces.”

In thinking back, Mikko recalls how the furniture design for Working with PAL started from sketching out different table options.

“We were creating sketches of possible scenarios and furniture options that you could have inside the Framery Q pod,” he says. “Finally, we came up with the idea of the long table, which provides more space for items to be placed down on, but at the same time still offer a lot of space inside the pod.”

Adaptability is another benefit that Working with PAL brings to the Framery Q. 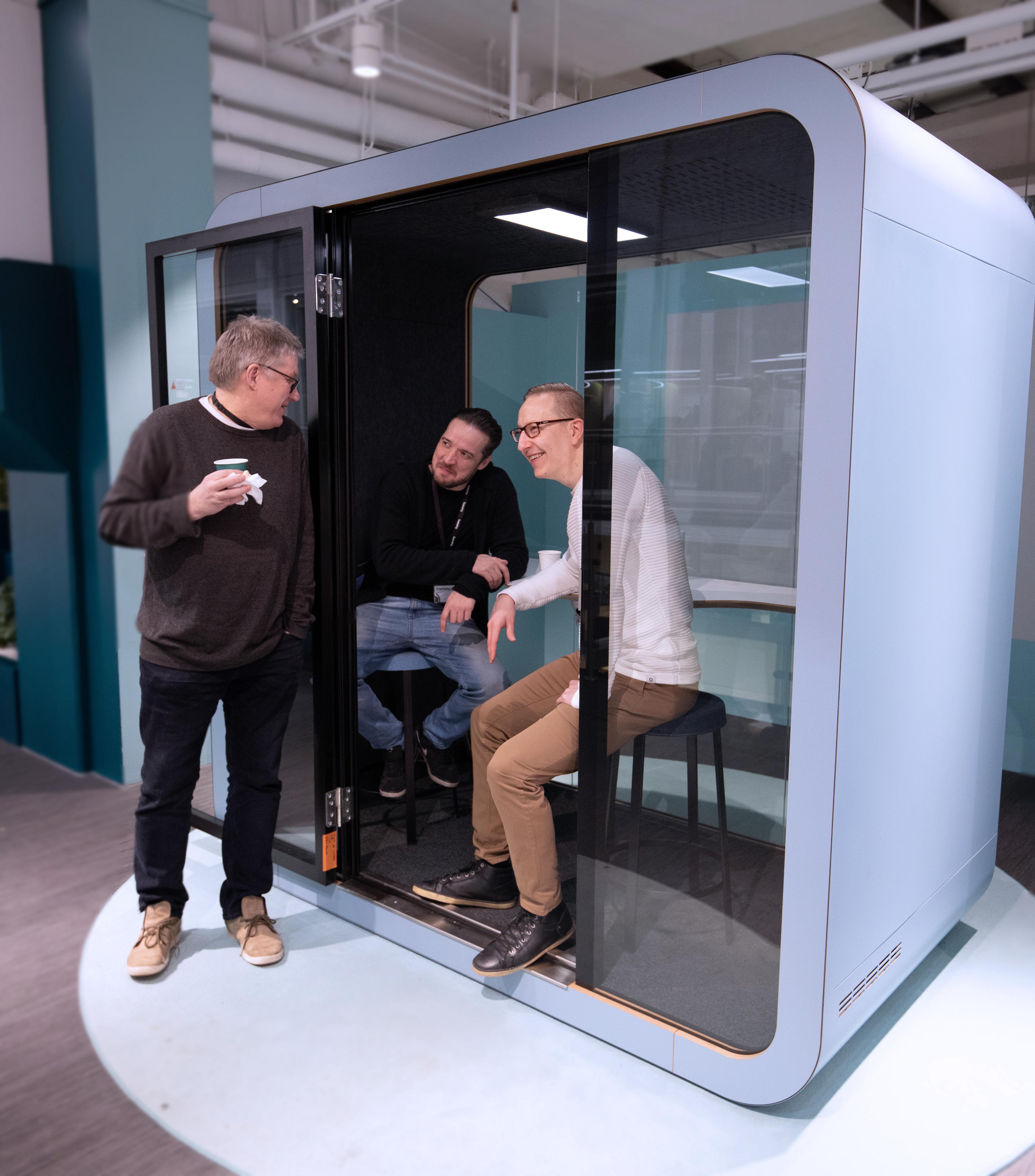 “We came up with the movable and loose furniture, especially the PAL stools, which give the pod alterability for its workers,” Janne explains. “You can move them around as you wish, allowing for more people to join inside the pod for times when needed.”

Long table enables for unique configurations in the pod

The furniture design for Working with PAL wasn’t always so simple. Its ergonomics and the center of gravity were unique and had to be considered when designing this furniture. 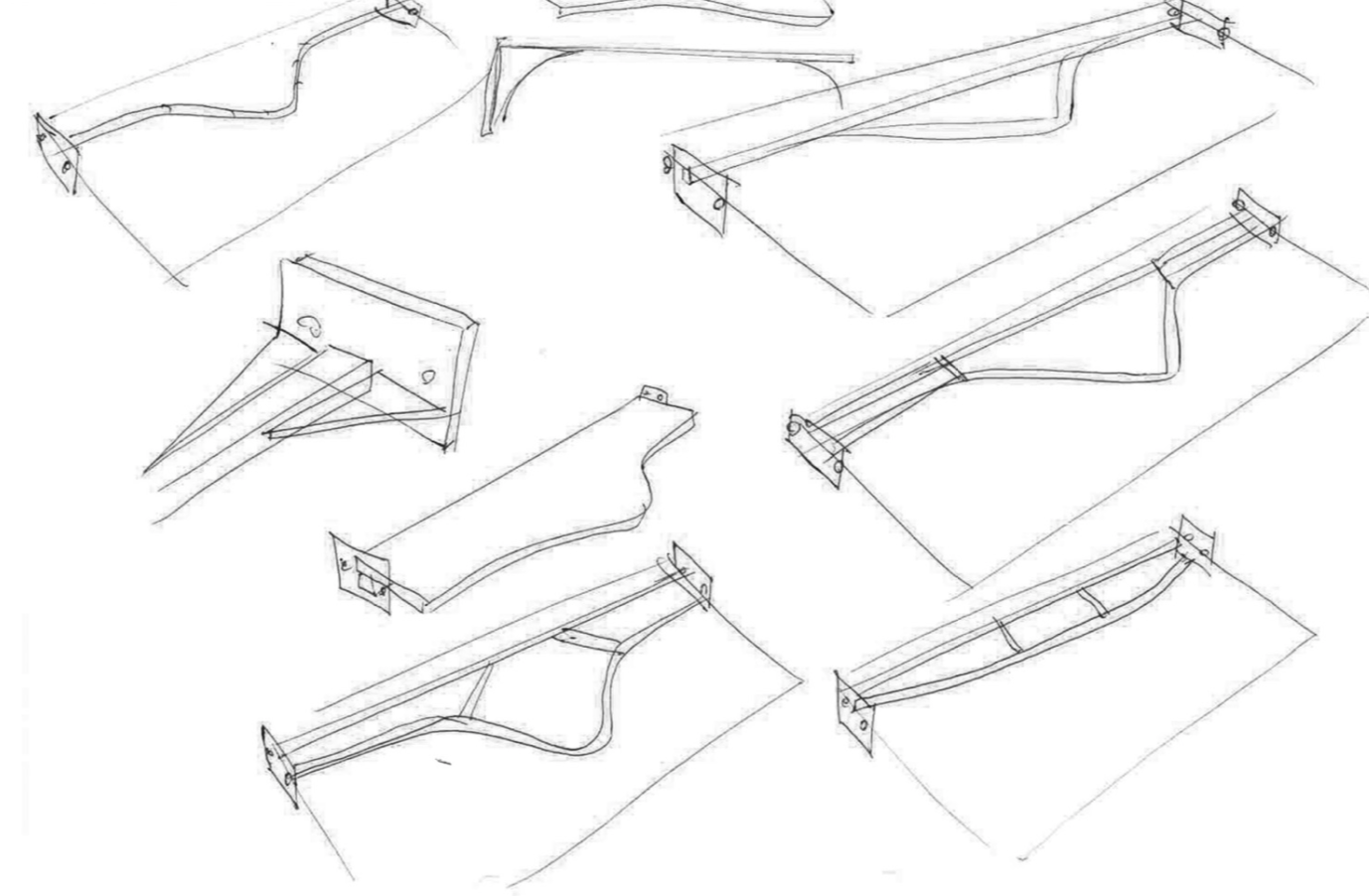 “We thought about all the possible ways that users could work inside the pod,” Mikko explains. “The furniture was designed so that there can be two people having a video conference alongside a third person entering and joining the pod, with a laptop sitting at the center of the table.”

The table’s form in this kind of configuration, when considering different situations, is something worth emphasizing.

“In this scenario, the three people form a triangle in a way that they’re all equals when having a conversation together,” says Pekka.

In designing the special long table, flexibility and various usage situations were always part of the though process when ensuring and ideating the different ways that the pod could be used.

“The form of the table allows for a quick meeting with two people facing each other,” Pekka continues. “In another situation, those same two people could use the pod and want the focus to be only on their individual work. The length of the table enables them both to work on their own tasks without disturbing one another.”

Following the design of the long table, it needed some chairs, and this is when Pekka came up with the tall PAL stools.

“There’s been a lot of discussion and studies about the health benefits of working while standing upright. In more and more office environments, you’ll see people working in a half-stand position in which they’re ready to change their position quickly if needed. This was the idea behind the PAL stools.”

“In more and more office environments, you’ll see people working in a half-standing position in which they’re ready to change their position quickly if needed. This was the idea behind the PAL stools.”

So why are there two different height options for the stools in Working with PAL?

“In addition to being convenient for people of different heights, the higher stool option offers the possibility to quickly change positions, from sitting to standing up without much thought or delay,” Pekka explains. “It’s a common and universally recognized height for a bar table or a counter. And for longer periods of working, the lower stool provides a more supported position.”

The PAL stools also support the idea of short-term working sessions inside the Framery Q.

“When working in a half-sitting position, it encourages fast movement so as not to tempt a worker to want to camp out there all day, as if he would be on a sofa,” adds Mikko.

Following the furniture design for Working with PAL, there were still further design requirements in the pipeline.

Next up, we will introduce you to a feature designed for longer periods of working. Stay tuned.