Take a behind-the-scenes look into the Framery way of life. Dive a little deeper into the story of how our products, including the Framery 2Q, came to realization from the very beginning. We’re proud to be able to introduce you to the talented Framery team behind the ultimate meeting pod, 2Q. Without these amazing folks we wouldn’t have been able to bring you our biggest, most beautiful pod yet, which we proudly launched last summer at NeoCon in Chicago.

We spoke with three of our own experts behind the 2Q project to offer a sneak peek into the creative design process, project management and more from three unique points of view. First up we will take a look at the project management. 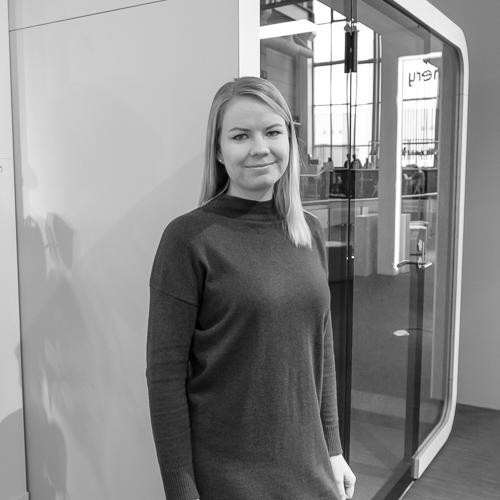 As the heart and soul behind Framery 2Q, Maiju is responsible for everything linked to the company’s innovative and newest meeting pod on the block.

Her passion for the 2Q is second-to-none, with an enthusiasm and confidence in her work and sharing any recognition with her team and colleagues to also soak in and enjoy.

“Things that inspire me today are the upcoming showcases and then the simpler things in every-day work life, like approaching deadlines. It gives me tremendous motivation to see the finished product.”

And Framery’s own customer feedback is what got the wheels in motion for her motivation.

“It all goes back to our existing customers of today and future customers of tomorrow. That’s why we’re here. In fact, the 2Q project all started from that demand in the market,” she says.

“We’ve aspired and hoped to be able to respond to our customers’ needs with larger-sized pods. And here we are today. So, when we got the 2Q project underway, we already knew the size we would be aiming for. In addition to size, wheelchair accessibility was also key and set its own tone to the project.”

Now just over two years into Framery, Maiju has gained a wealth of experience working for a global, yet nimble company like Framery, even driving R&D projects like the 2Q.

“Of course, the tight schedule creates suspense,” Maiju admits. “You really can’t afford too many failures. But at the same time, you need to trust the process.”

Despite the suspense, Maiju’s has a cool and collected demeanor, seemingly always knowing how to hold it all together.

“I need to be aware of what everyone’s up to and for that reason, I’m a big fan of meetings. Throughout the 2Q project, as deadlines approached I would arrange daily scrums for my team.”

But one thing Maiju doesn’t seem to ever need to do is to motivate her team.

“I’m in that lucky position that my team is already super motivated. Sure, my role is important, and I always need to be attentive, but my main job is to see the big picture and the project as a whole, schedule and prioritize my team’s tasks and ensure that together we keep everything on track.”

Of course, not everything is a walk in the park and Maiju admits there have been some challenges at times during the project.

“The schedules given from outside are something we can’t control, and they can be challenging, considering our project schedule,” she says.

“And the design also sets its own challenges. We aim to create the right kind of atmosphere inside the pod and at the same time to maintain the Framery design, feeling and quality. It’s certainly a balance.”

While for some people, tight schedules and deadlines would cause some graying hairs, Maiju doesn’t dwell on those too much and instead takes them in stride.

“Challenges, deadlines and setting the goals motivate me. One of the most rewarding phases of the 2Q project was the one of the last prototypes we built. It was so close to the final version and finally everything was coming together.”

Back to thinking some more about her own team, Maiju can’t say enough about how happy she is with those she’s working with day in and day out.

“We have amazing team spirit among our R&D group. For me, happiness at work is all about being surrounded by the best colleagues!”