Noise is a largely misunderstood concept. Most efforts to control noise target keeping sound pressure in a given environment under unhealthy levels. This is very important as exposure to elevated noise levels can have significant physiological and psychological effects. Effects of noise to cognitive performance of office workers are deservedly gaining more and more attention as well, with open plan offices being deemed disadvantageous to productive knowledge work. However, there’s room for nuance, especially in discussions about noise in the workplace.

How noise in the workplace affects the people

First of all, noise is experienced subjectively. For example, one person may enjoy working in a coffee shop with a little background buzz, while for another, it may be impossible to concentrate and complete any tasks in that kind of environment.

People tolerate varying degrees of noise, but this is only partly related to noise levels measured in decibels. In addition to some sounds being more distracting than others because of their physical characteristics like frequency, amplitude and complexity, the level of distractibility of a sound differs between people and is also dependent on a person’s physical and psychological state. It turns out that information carried by sound plays a major part as well.

Often ambient background noise or poor interior acoustics are blamed when a work environment gets in the way of productivity. It may be surprising, but in an office with very low noise levels and carefully designed acoustics, concentration can still prove challenging because of a quiet phone call or conversation between colleagues a few desks away.

“In an office with very low noise levels and carefully designed acoustics, concentration can still prove challenging because of a quiet phone call or conversation between colleagues a few desks away.”

When does noise in the workplace occur

Research suggests that distractions in open plan offices are mostly the result of background speech that is irrelevant to the listener. Also, regardless of how loud the background chatter is, it’s a distraction if it’s audible enough to understand. In a quiet office, for a discussion to be inaudible, it either has to take place halfway across the space or in another room. This is the noise problem of open plan offices. If only there were small sound-insulated rooms scattered around offices. 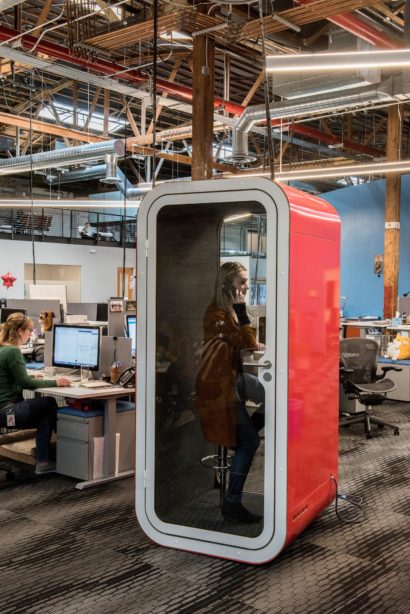 Measuring noise in the workplace

Uncertainty about what really matters in office acoustics is also reflected in the methods used to measure acoustic performance of work environments. For example, the level of sound insulation of an acoustic element is typically expressed using a unit called Sound Reduction Index (R or Rw). It’s a good way to describe the ability of a single component, for example a wall, to reduce sound passing through it.

Sound Reduction Index is less than helpful though if it’s used to describe the effectiveness of, let’s say, a desk partition, since sound is more than capable of passing around it. Sound Reduction Index does an inadequate job of describing the sound insulation of closed spaces as well because those are always combinations of various components, such as walls, doors, ventilation channels, etc. You wouldn’t trust a roof to keep out water if you only knew that a single tile does.

Tackling the problem of noise

There’s a lot happening in the development of less distracting work environments. More user-centric office concepts, like the activity-based office, are being adopted. Products in the market like Framery’s award-winning pods, that not only eliminate noise enabling focused work but also provide much needed social cues in workplaces are becoming more common.

New standards that offer improved ways to measure and communicate acoustic performance are also under development. One example of this is a standard (ISO/DIS 23351) being developed by Turku University of Applied Sciences for testing the sound insulation of furniture ensembles, such as closed and semi-closed spaces.

All in all, significant steps are being taken to help people working in less than ideal environments, and creating a better understanding of the problems they face is one of them.

Haapakangas A. Subjective reactions to noise in open-plan offices and the effects of noise on cognitive performance – problems and solutions [Ph.D.]. University of Turku; 2018.

When the walls come down – how smart companies are rewriting the rules of the open workplace [Internet]. Oxfordeconomics.com. 2018 [cited 16 September 2018]. Available from: https://www.oxfordeconomics.com/my-oxford/projects/336497

Bernstein E, Turban S. The impact of the ‘open’ workspace on human collaboration. Philosophical Transactions of the Royal Society B 2018;373(1753).