Are you thinking about making a change to your company’s office space? Eyes over here please! We gathered all the relevant information for you to decide between meeting rooms and office pods.

Office tenants and managers often inquire which kind of rooms, pods or constructed conference areas, are more cost efficient in the short and long term. In a recent study Framery teamed up with commercial real estate services firm, CBRE Finland, and compared the total costs of one, four and six-person Framery soundproof office pods to the cost of meeting rooms of equal size in Europe, the United States and Asia. The findings revealed interesting insights meant to provide office tenants and managers with the tools necessary to make informed decisions about the design and layout of their space.

For example, in Helsinki specifically, purchasing a Framery O pod is nearly 50% less expensive than building and constructing a small meeting room.

“The research touches on a very common topic in office leasing and real estate development. Despite the prevalence of the topic, relatively little research has been done on the subject. As one of the leading suppliers of soundproof pods and mobile meeting rooms, Framery was truly innovative in proposing a collaborative effort to clarify the matter.”, says Ilkka Niska, Director of Project Management and Workplace Consulting at CBRE Finland.

While the study was done in tandem with both companies, CBRE Finland took on the responsibility of all the calculations and calculation analysis. The research varies on the size of the hypothetical office and its location. The charts below for the costs of rooms and lifecycle costs are calculated with a setup of twelve small, six medium and three large meeting rooms in a medium-sized flexible workplace and are compared with a single-person Framery O office phone booth, 2-4 person Framery Q office pod and 4-6 person Framery 2Q meeting pods. The office pod prices are based on estimates for the average total of costs in the specific market areas for transportation and assembly, so that the hypothetical pods are ready for use!

Overall, we discovered that small meeting rooms are often more expensive than the corresponding Framery office pods in every city across Europe, Asia, and the USA. This outcome is partially due to the fact that the total cost of constructing a conference space and maintaining it is higher than the price of purchasing a pod and its upkeep. (Click the image to enlarge.)

For lifecycle cost comparisons, we’ve crafted four different, yet common, office scenarios that would impact the estimated price and cost over time for meeting rooms and office pods.

The main idea here is that the tenant can take all of their previously purchased pods with them, and use them in a new office or construct a relative amount of fixed meeting rooms again in a new office. Wherever you might fall within these crafted scenarios, there is likely one that might line up closest with your future plans for the office, and the cost comparisons for life cycles between constructed meeting rooms and Framery office pods will help make the best decision based on those projected plans. (Click the image to enlarge.)

In terms of total lifecycle costs, the long-term cost benefit of pods outweigh that of newly built infrastructure for the tenant. Let’s say for example, that if the total life-cycle cost of rooms in Helsinki is indicative for life-cycle costs in other cities, larger office pods may be a more optimal choice than comparative constructed meeting rooms. A reason for this is because Framery office pods are movable, and constructed meeting rooms are not. That said, if a business decides to move locations, the lifecycle cost of a Framery pod is more valuable than that of a built-in conference room.

The study reveals that the choice between office pods and constructed meeting rooms depends heavily on the average size and cost of the office as well as the location in question and future plans for change. The lifecycle of a Framery pod is significantly less costly than that of a constructed conference room. It’s not only saving clients’ money in the short term, but benefiting them in the long term as a worthwhile investment.

Folding into this conversation surrounding lifecycle comparison, pods are more cost efficient when considering the skyrocketing prices of real estate and office space across major cities. For example, in Helsinki specifically, purchasing a Framery O office phone booth is nearly 50% less expensive than building and constructing a small room. This is based on the cost of real estate and amount of space that is considered average in these locations.

Framery pods are designed to be as compact as possible, serving the needs of today’s workplace climate. 80% of all meetings are held between one to four people – which means having an appropriately sized meeting space is cost efficient for the business and it’s staff. Instead of constructing rooms or expanding offices, Framery pods can be configured to fit within the existing office space. As a result, pods conveniently create additional rooms without the need for real estate expansion. It’s a great investment of company capital, given that pods are flexible and can be configured to adapt to the existing office environment. (Click the image to enlarge.) 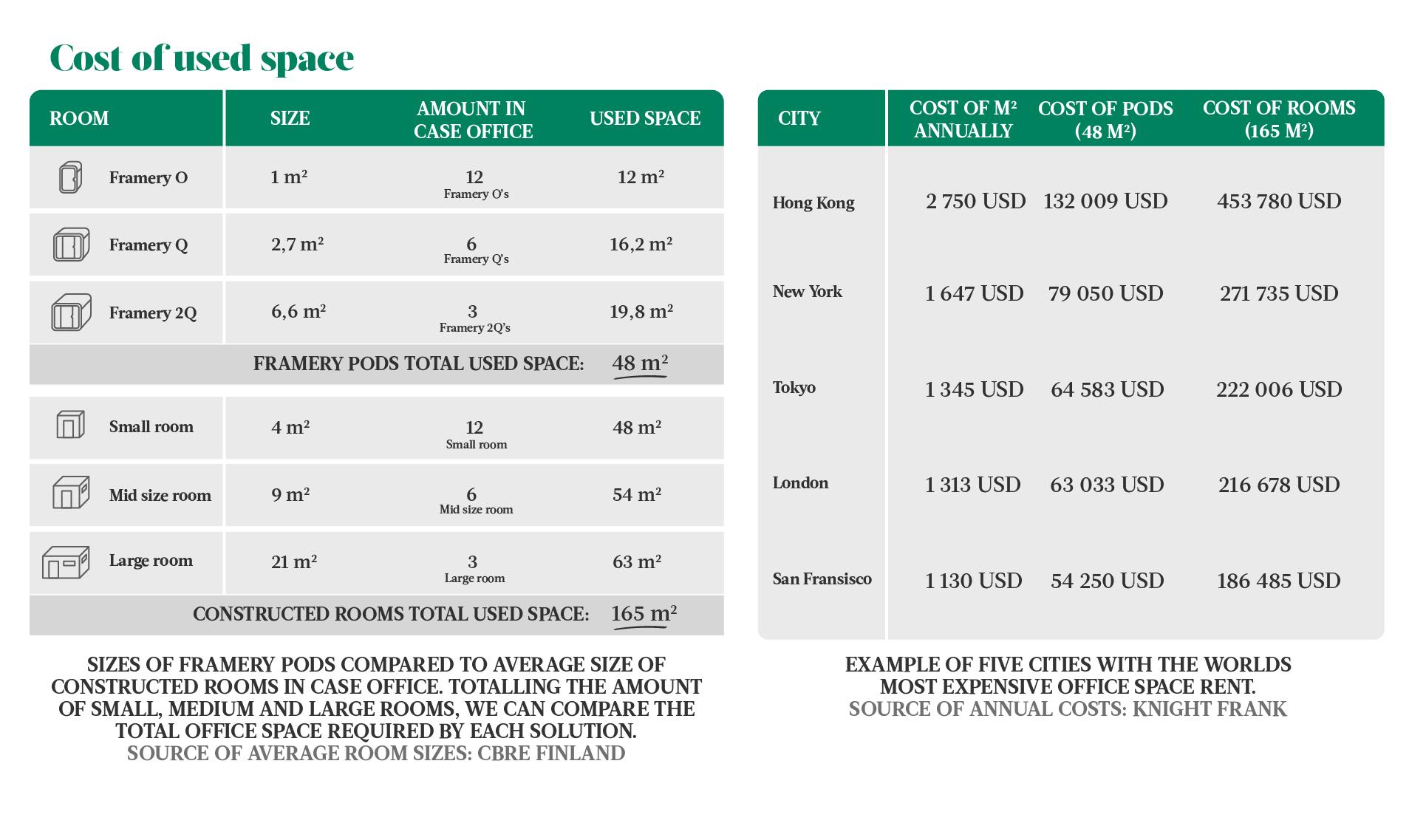 Other components to consider is the overall feature comparison between constructed rooms and movable pods. Office pods, given that they are a product for purchase, have a guaranteed level of performance and are more likely to meet expectations – they are also easy to move and can be placed anywhere in the existing workplace. However, when constructing a meeting room, the consumer might not be certain of the type of acoustics and/or quality of sound insulation that would be a result of the newly built room.

Office pods have a guaranteed level of performance, are easy to move and can be placed anywhere in the existing workplace.

“The study and the results of modular rooms being cost efficient and flexible solutions compared to constructed rooms has led to interesting discussions with both landlords and tenants.” continues Ilkka Niska, Director of Project Management and Workplace Consulting at CBRE Finland. “I’m looking forward to seeing how the needs of the office change in the near future and what impact it will have on the subject of this study.”

Ready to make the best strategic decision for the future of your office? Find your local Framery contact to help you get started!